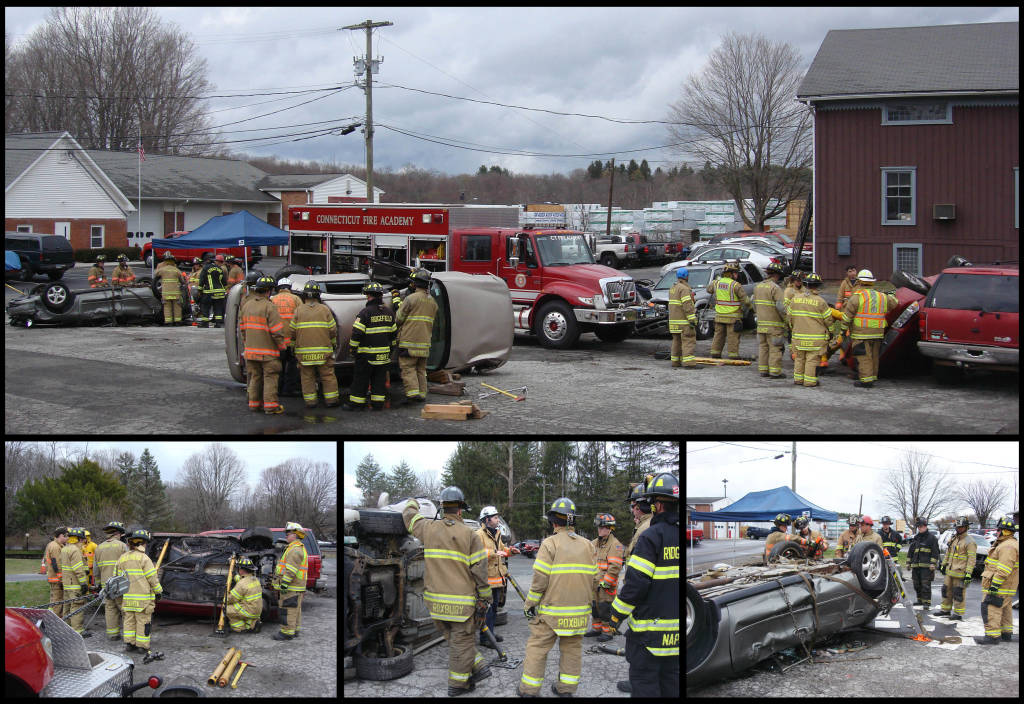 On the weekend of April second and third, the Hawleyville Vol. Fire Company #1 hosted an advanced vehicle extrication class on the grounds of the fire company. The class was the result of an application by the fire company to host a state sponsored training program through the Conn. State Fire Academy, located at Bradley Field in Windsor Locks.

The fire company was notified in January that they had been selected as a host site for the program. Twenty five students from around the state converged on the Hawleyville Fire Company grounds for the two day, sixteen hour class. The intensive program centered on advanced extrication techniques, both classroom and practical applications. The state Fire Academy assigned four instructors both days along with the state’s’ heavy rescue truck and support equipment that was delivered to the site on April first. As a host fire company, you are awarded four free slots at a value of two hundred dollars each. If the fire company had contracted for this program it would have cost in the area of five thousand dollars. By providing the building and grounds as a host site, there is no cost to the company, plus the receipt of four free positions in the class results in a substantial savings to the town. The recent acquisition of the adjacent property by the fire company, makes the company property very attractive as a host site with our proximity to Interstate 84. The large open area also provides a safe area in which to train and park vehicles, along with our firehouse hall, all being on the same level.

A total of ten vehicles of all sorts of models and sizes were donated and delivered for the class by McLaughlin Towing and Recovery of Danbury. Owner Michael McLaughlin is a longtime volunteer firefighter. Additional assistance was provided by Hilario’s Towing, who demonstrated their new rotator truck.  Additional assistance in setting up the scenarios was provided by Charlie Payne with his excavator, the fire company provided a hot meal each day which was well received by the participants who labored under extreme cold and windy conditions along with snow squalls.

This past year, the company also received a grant for a fire ground strategy and tactics class which was split with the Beacon Hose Co. #1 of Beacon Falls. Many residents and their families stopped by and viewed the activities over the weekend and expressed their thanks for the dedication of the membership to train and upgrade their skills. Hawleyville Fire Company does a high number of accidents on Interstate 84 that often calls for a highly technical extrication response.

This site uses Akismet to reduce spam. Learn how your comment data is processed.

As a nonprofit agency, we rely on donations to operate our organization.